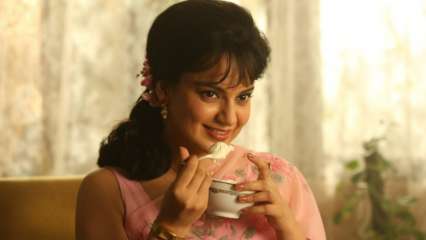 On the occasion of Kangana Ranaut’s 34th birthday, the makers of Thalaivi has finally dropped the much-awaited trailer of the film. The trailer released in Tamil showcases the journey of Kangana as J Jayalalithaa from being an actor to a revolutionary leader. The actor looks gorgeous as the late actor and former Chief Minister of Tamil Nadu as she left no stone unturned in getting into the skin of her character.

The trailer also shows her relationship with MG Ramachandran (MGR) played by Arvind Swami. Thalaivi with the guidance and love of MGR was adored by the people and continued till the very end. After MGR’s death, she showed how she can be an independent leader and win people’s hearts with her work and dedication. The trailer shows different phases of Kangana as Thalaivi and she will give you goosebumps with her powerful performance.

The premise of Thalaivi is described as “The superstar heroine, the queen of romance and the one who rose to power despite a patriarchal political system. The story we all know, the life story we don’t know.”

The upcoming biopic will be released in multiple languages including Tamil, Hindi among others. Thalaivi is slated to release on the big screen on April 23, 2021.

U.K. prime minister Boris Johnson has confirmed that fully vaccinated travelers no longer will have to take any...
Culture