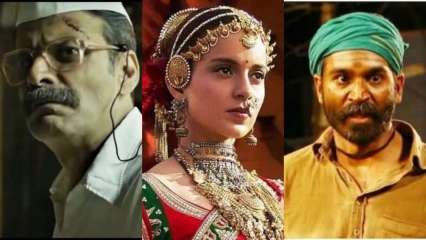 The 67th National Film Awards are currently being announced in New Delhi. The awards are for films from the year 2019. The event is organised by the Directorate of Film Festivals, which comes under the Ministry of Information and Broadcasting.

Kangana Ranaut won the National Award for Best Actor for ‘Manikarnika’ and ‘Panga’. Apart from her Mono Bajpayee won for ‘Bhonsle’ and Dhanush for ‘Asuran’.

In January, Kangan had taken to her Twitter account to celebrate 2 years of her film ‘Manikarnika: The Queen of Jhansi’. The film not only starred the actress but was also co-directed by her. In a tweet, Kangana commemorated all the things that the film achieved at the box office. She also shared two photos, one of her in a wheelchair with a cast on her foot and the other of the cut on her forehead caused by an accident during sword fight practice.

For the uninformed, ‘Manikarnika: The Queen of Jhansi’ traced the journey of the heroic Rani Laxmibai, who fought against the British during India’s first war of independence in 1857. Though Rani Laxmibai died during the battle, she inspired the anti-colonial struggle and became one of the most important figures of the Indian freedom movement.

Kangana later had also announced a standalone sequel to the film titled ‘Manikarnika Returns: The Legend of Didda’. The historical drama will chronicle the life of Didda, the warrior queen of Kashmir, who prevented Mahmud of Ghazni’s attempts to invade Kashmir twice.

As for ‘Panga’, Kangana Ranaut starrer was released on January 24, 2020, and was directed by Ashwiny Iyer Tiwari. The film also starred Jassie Gill, Richa Chadha, and Neena Gupta in the lead roles.

Our daily workwear reports suggest one piece of work-appropriate attire in a range of prices.Everything about this dress...
Travel