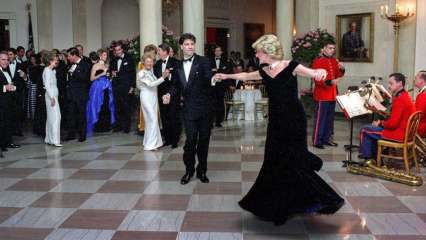 There are many photos of Princess Diana which have gone down in the history. Among them, one which is etched in the memories of many is where she danced with John Travolta back in 1985 at the White House. During a recent interaction with Esquire Spain, the Grease actor recalled the moment and narrated the whole story behind dancing with Diana and her reaction when he approached her.

John told the magazine, “I didn’t expect to be asked to dance with her. I had the great privilege and honour to do so. And I thought, ‘There must be a reason to do this and I better give it my all …’ This meant guiding the dance well and seeking to have fun. That was the easy part, but introducing myself to Diana in the proper way, conveying assurance, and asking her to be my dance partner was a complicated mission.”

Travolta further said, “We are in the White House. It’s midnight. The whole stage is like a dream. I go up to her, touch her on the shoulder, ask her to dance. She turns around and when she sees me, she displays that captivating smile, somewhat sad, and accepts my invitation. And there we were, dancing together like in a fairy tale. Who could imagine that something like this is going to happen to you one day? I was smart enough to register it in my memory as a very special, magical moment.”

Meanwhile, ace photographer Pete Souza after reading John’s interview narrated his side on his Instagram page. He shared the iconic photo of Diana and John dancing with a caption which read as ” made this photograph more than 35 years ago, but remember the moment as if it were yesterday.⁣ Apparently, John Travolta does too.⁣”

Pete also wrote, “The occasion was a black-tie dinner at the White House on November 9, 1985, in honour of Prince Charles and Princess Diana. It is often referred to as a “state dinner” but since Prince Charles was not a head of state, it was not, in fact, a state dinner (though it certainly had all the trappings of one).⁣ A few little known facts from that night: Diana also danced that night with President Reagan, Tom Selleck, Clint Eastwood and Neil Diamond. She did not dance with Prince Charles.⁣ During her dance with John Travolta, the military band played a medley of songs from Travolta’s movie, Saturday Night Fever.⁣”

Not just that, Souza shared photos of Diana dancing with Neil Diamond, Tom Selleck among others.

Princess Diana married Prince Charles in 1981 and they separated in 1996. A year later, she passed away in a car crash in Paris.