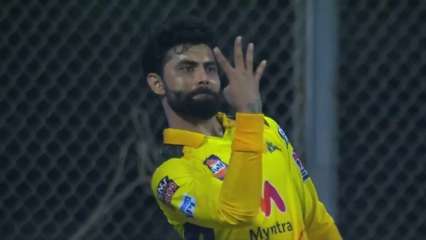 The postponement of the Indian Premier League (IPL) has suddenly left the fans of the game and the tournament itself dejected and disappointed but the fans have found new ways of entertaining and engaging themselves on social media, this time using the picture of Chennai Super Kings all-rounder Ravindra Jadeja from his side’s game against the Rajasthan Royals.

After two cases in the Kolkata Knight Riders camp and a few cases in Chennai Super Kings camp including that of bowling coach Laxmipathy Balaji and batting coach Michael Hussey, two new cases emerged out of the iPL bubble, one from Sunrisers Hyderabad of wicket-keeper batsman Wriddhiman Saha and one from the Delhi Capitals, of leg-spinner Amit Mishra.

The BCCI and the IPL Governing Council had to make a decision before the cases spread like a wildfire in the bubble and decided to postpone the event keeping the health of everyone involved in mind.

The postponement took place on May 4, Tuesday and Jadeja’s reaction when he signalled that he took four catches against the Royals on April 19, has gone viral. Many people suggested that Jadeja knew that the IPL was going to be postponed from the 4th of May.

A resounding victory for @ChennaiIPL against #RR by 45 runs.