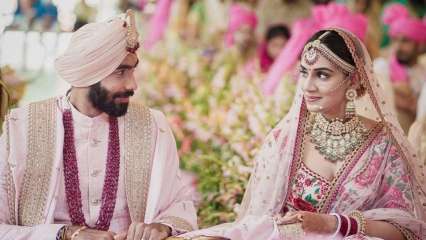 India pace spearhead Jasprit Bumrah, who recently got married to TV presenter Sanjana Ganesan, was once given advice on marriage by former India all-rounder Yuvraj Singh. During the COVID-19 lockdown, Yuvraj and several other cricketers started hosting live sessions on Instagram. During one such session conducted by Yuvraj, Bumrah sought relationship advice from the southpaw and asked whether Yuvraj is still a momma’s boy after marriage to Hazel Keech or not.

Yuvraj added, “You have peace in your life right now. That will change once you get married. Enjoy it now because once you are married, your life will be all about finding balance at home. It helps if you have a good life partner.”

Bumrah tied the knot with Sanjana on March 15 in Goa in a extremely private ceremony. The wedding ceremony was attended by around 20 people, due to the COVID-19 restrictions.