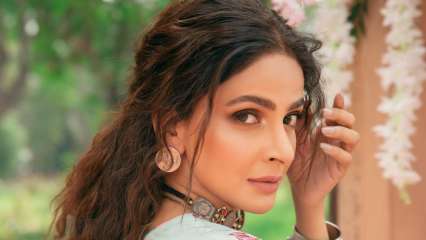 Popular Pakistani actor Saba Qamar who starred in Irrfan Khan starrer Hindi Medium recently announced on her Instagram page. The actor released a statement regarding calling off her marriage with Azeem Khan. In her long note, Saba made a shocking revelation of never meeting the man in her life with whom she was all set to tie the knot. Soon after her statement, Azeem also wrote on his Instagram page about taking full responsibility for the breakup.

Saba’s statement read as “Hii Everyone. I have a very important announcement to make, due to a lot of personal reasons I have decided to call it off with Azeem Khan, ‘WE ARE NOT GETTING MARRIED NOW’ hope you guys will support my decision just like you all have been supporting me always, and I guess it’s never too late to realise the bitter realities!”

She added, “I also wanted to clear ONE IMPORTANT thing that is: ‘I have never Met Azeem Khan in my life we were only connected over the phone.'”

While concluding, Saba wrote, “It’s a very hard time on me right now but as we all know ‘THIS TOO SHALL PASS’ Insha Allah 🙂 Much love to you all! – Saba Qamar.”

Whereas Azeem wrote, “You have the most amazing soul and you deserve all the happiness in the universe. May God bless you with all the success and love. Difficult roads often lead to beautiful destinations. And yes, I’d like to take full accountability of this breakdown.”

Take a look below:

Earlier, soon after Saba and Azeem announced their engagement, the latter was accused of sexual harassment by a woman. To which even Azeem denied all allegations.