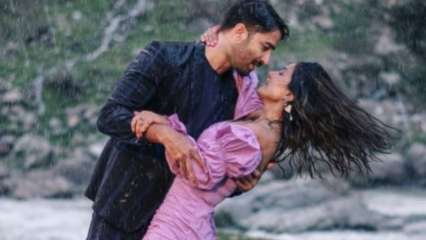 Hina and Shaheer, who both hail from Kashmir, shot for the music video in the valley last month. The song is scheduled to release on June 3.

Meanwhile, Hina and Shaheer having been teasing fans by sharing behind the scenes (BTS) footage from their upcoming music video.

Hina Khan took to her official Instagram handle to share a new BTS video from the sets of ‘Baarish Ban Jaana’ and captioned it, “BAARISH BANN JANA With @shaheernsheikh 3rd June on @vyrloriginals #BTS #Reels #feelkaroreelkaro”

She shared another video where both actors are seen shivering in the cold as they are giving their shot. Hina is seen wearing a white dress and Shaheer in a white shirt paired with blue trousers. ‘Posing and snuggling.. Coz it was damn coooold…Thank you for your jacket @shaheernsheikh #BTS #BaarishBannJana 3rd June Stay Tuned,’ read Hina’s caption.

Soon after Hina shared the video, Shaheer had a hilarious response to lending his jacket to the actress amid the chilling weather in Kashmir. He took to the comments section and wrote, “You are welcome.. but I guess after I took off my jacket I was freezing too.”

Check out all the clips that Hina and Shaheer shared teasing fans for their upcoming music video:

Meanwhile, the creative director of ‘Baarish Ban Jaana’, Pooja Gujral said, “The monsoon being a popular season, it’s a good time for them to hear a nice melody. So, we are trying to create a monsoon franchise of ‘Baarish’ songs every year. The idea of casting for this song was it should be refreshing and different and, most importantly, unexpected. Hence, Hina and Shaheer were on the priority list.”

She further added, “Rather, they were my only choice as both of them bring this amazing freshness on screen. Hina’s vibrant smile and we needed somebody who can bring that on-screen does full justice. Also, I had worked with Hina and Shaheer in the past on two different videos and both of them have been amazing.”

In April, both Hina and Shaheer had shared pictures with each other from Kashmir. They had hinted at an upcoming collaboration that had left their fans excited.

Recently, Hina was seen in another music video, ‘Pathar Wargi’ which was composed by B Praak and also featured Tanmay Ssingh.

On the other hand, Shaheer announced the new season of his hit TV show ‘Kuch Rang Pyar Ke Aise Bhi’. Besides Shaheer, the show features Erica Fernandez and Supriya Pathak in the lead roles.

Abhishek Bachchan opens up on recovering from COVID-19, having dad Amitabh Bachchan as company in hospital