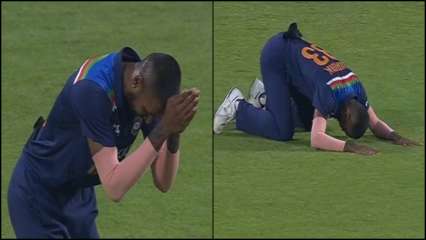 India and England put on a thrilling show in the third and last ODI at the Maharashtra Cricket Association Stadium in Pune. Put to bat first, India posted a mammoth score of 329 runs on the board.

Coming to chase down the target, England had a torrid start as they lost both their opening batsmen Jason Roy and Jonny Bairstow to Bhuvneshwar Kumar.

Bhuvi was all set to include another wicket under his belt in the fifth over, however, a blunder got all-rounder Ben Stokes a safe ticket.

The batsman hit the ball in the air to and the ball travelled only till mid-off. Hardik had comfortably reached under the ball but dropped an absolute sitter.

Dropping Stokes could have cost India terribly after seeing his exploits in the second ODI. However, much to the Pandya’s relief, Stokes lost his wicket to T Natarajan in the 11th over as Shikhar Dhawan took the catch easily. Stokes was sent back to the pavilion at 35 off 39.

However, taking a dig at Pandya’s drop catch was Indian Premier League (IPL) franchise Delhi Capitals (DC). They were quick to react to the entire incident as they came up with a quirky tweet.

Dhawan, who plays for Delhi in the cash-rich tournament, trolled the Mumbai Indians (MI) player by posting a meme featuring Shikhar along with the caption, “You’re welcome, Hardik Pandya #INDvENG”.

The Virat Kohli-led side won all the series’ in this England’s tour of India. India clinched the ODI series 2-1 by just seven runs. They had also won the four-match Test series 3-1 and then went onto win the five-match T20I series 3-2.

England fought well but lost the nail-biter as they managed to score 322/9 in 50 overs thanks to Sam Curran’s unbeaten 95.