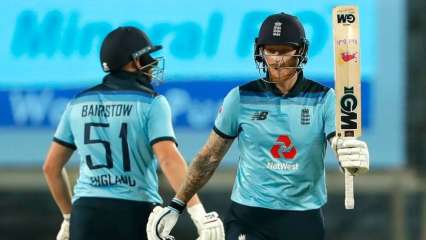 Before the second ODI between India and England in Pune, England’s star all-rounder Ben Stokes made a hilarious revelation about the team. He spilled the beans on the team’s use of fragrance saying that the entire England team uses women deodorants before stepping onto the field. While revealing his favourite smell, Stokes went to on say that women deodorants smell better than men’s.

“It smells better. The pomegranate one — it’s top drawer,” Stokes was quoted as saying to talkSPORT from India. “I’m not the only one,” he said.

The show’s hosts, Laura Woods, Ally McCoist, and Jamie O’Hara, further asked him about who all use these deodorants, Stokes said, “The whole squad.”

While Stokes chuckled the hosts had a laugh too. Stokes was one of the stars for his side on Saturday as his knock of 99 runs off just 52 balls was the catalyst in dictating England’s performance as they beat India by six wickets in the second ODI chasing down 337 runs in just 43.3 overs.

The 52-day long tour will finally come to a conclusion on Sunday as the two teams take on each other for one final team in the decider in Pune with series levelled on 1-1.