Edmonton Oilers storm back to down Jets – Edmonton 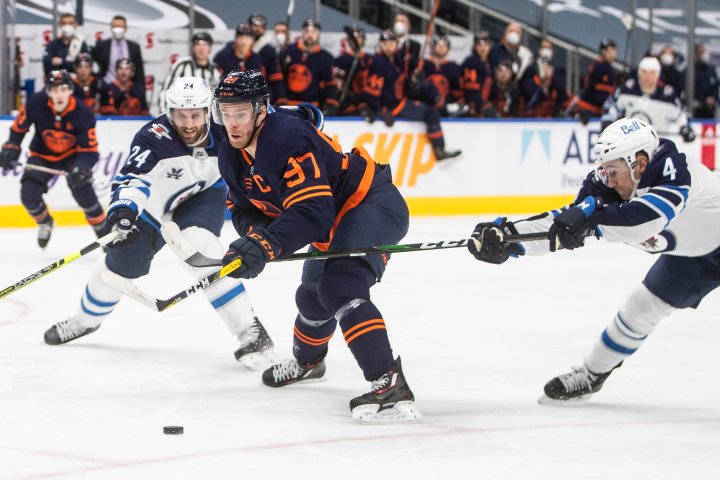 The Edmonton Oilers responded from an early deficit to knock off the Winnipeg Jets 4-2 Saturday night at Rogers Place.

The Jets jumped out to a 2-0 lead on deflection goals by Andrew Copp and Nik Ehlers. Connor McDavid replied before the end of the first, firing a low shot past Connor Hellebuyck.

“We’re resilient,” Oilers forward Leon Draisaitl said. “We figure out different ways to stick around and win hockey games and that’s obviously a big part of making the playoffs.”

With just under seven minutes to go in the second, Mike Smith misplayed the puck behind the net and bounced in front to Kyle Connor. Connor flipped backhand at the yawning cage, but Smith dove back into the crease and snared it with his glove.

“A goaltender can make saves, but it’s timely saves that matter the most in the game, so those are the ones that came at the right time and allowed us the opportunity to come back in the game,” Oilers head coach Dave Tippett said.

Blake Wheeler hit the post in the dying seconds of the frame. Dylan DeMelo had most of the net to shoot at on the rebound, but he shot the puck into Smith’s right pad.

”We’re doing a better job of holding teams when they are up. We’ve had nights where we’re down one and we let them get another one and dig ourselves an even bigger hole,” McDavid said. “When you’re down like that, you’ve got to hold them and if it takes all period long, it takes all period long and we’ll take our chance when we get it.”

That chance came when Darnell Nurse ripped a shot over Hellebuyck’s glove early in the third to tie it 2-2. It was Nurse’s tenth of the season, tying the career high he set in 2018/19.

“I think Nursie always had an enormous ceiling just by his physical ability, and obviously he’s always had that, but I think he’s added so many things on the offensive side with the puck on his stick. He’s shown it all year—he’s finishing plays, he’s setting plays up—he’s been outstanding for us all year and obviously we’re very lucky to have him,” Draisaitl said.

With 10:24 left, Draisaitl pounded a pass from McDavid past Hellebuyck to give the Oilers their first lead of the night. Devin Shore sealed it with an empty netter.

With files from 630 CHED’s Brenden Escott