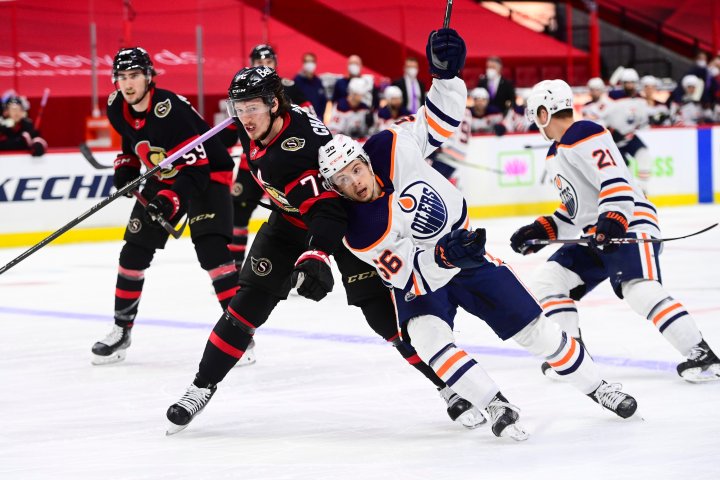 Mike Smith made 39 saves as the Edmonton Oilers outlasted the Ottawa Senators for a 3-1 win Thursday night.

Smith runs his record to 14-3-2 with a .922 save percentage. The Oilers conclude their season series with the Sens having won all nine games.

The Oilers were ahead with nine minutes remaining in the second period. Kailer Yamamato stormed the crease and whapped a loose puck past goaltender Anton Forsberg for a power play goal.

Connor Brown evened it up late in the period, scoring for the sixth straight game.

With 7:02 to go in the third, Devin Shore tipped home Caleb Jones’ point shot to put the Oilers ahead. It was Shore’s second goal in the last three games.

The Senators made a final push, pulling Forsberg for an extra attacker with 2:52 remaining, but Jesse Puljujarvi sealed it with an empty netter with 9.6 ticks on the clock.

The Oilers were without Ryan Nugent-Hopkins, who took a high hit from Thomas Chabot late in the game on Wednesday.

The Oilers, 25-14-2, will play in Calgary on Saturday. They’re not expected to play after that until Saturday, April 17.

Their games on Monday and Wednesday against Vancouver will be postponed because of the Canucks COVID cases.