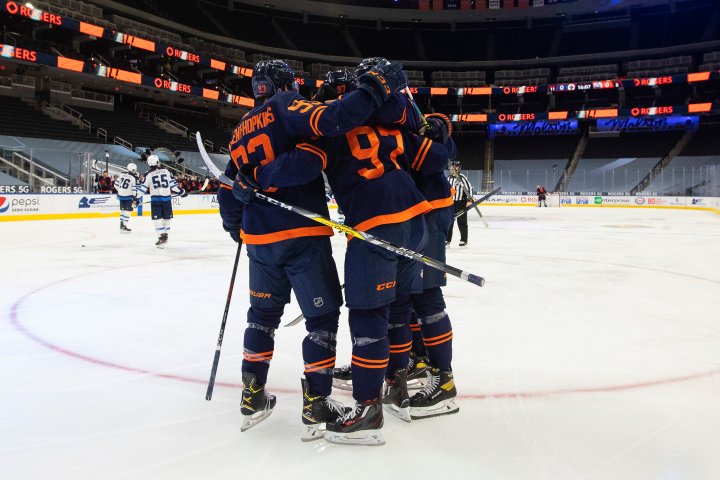 The Edmonton Oilers were on the ice at Rogers Place Thursday morning for the first time in 12 days.

The Oilers have endured an unusual road trip that saw three games in Montreal postponed, followed by two overtime games in Toronto. It concluded with a lackluster game back in Montreal.

“I think it was nice to get home, sleep in our beds, be with families. That’s just a big energy booster right there,” said winger Josh Archibald.

“Hope we got us back some energy,” said head coach Dave Tippett. “I don’t know if it was so much physical energy; but mental energy.

“You go on the road for that long and you’re kind of locked in a hotel. It wears on you a little bit.

“We had a good practice today. Hopefully, we got some of that zip back in our game that we were missing last game.”

The Oilers face more uncertainly with their schedule. They’ll play Calgary at Rogers Place Friday night. They’re scheduled to play the Vancouver Canucks on Saturday, but the Canucks had their Wednesday game against the Flames postponed after having two players and a coach go into COVID protocol.

“It’s not ideal, but every team is going through it.

“Our focus is on Friday; not on Saturday. We’re going to prepare for tomorrow and see what happens on Saturday,” said centre Leon Draisaitl.

Dominik Kahun was back on Draisaitl’s left wing on Thursday after being scratched the last two games. Alex Stalock was on the ice as a third goalie. The Oilers claimed Stalock off waivers from Minnesota on March 1. He hasn’t played this season after being diagnosed with myocarditis in November.

“We’ll see where he gets to you. He has good NHL experience. That’s why we picked him up,” said Tippett. “If we think he deserves a start, you never know.”