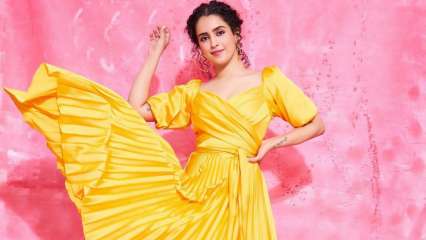 Sanya Malhotra is currently riding high on the success of her recent outing Pagglait. In the film, the actor plays the role of a young widow on the path of self-discovery and much more than that. Currently, Sanya is shooting for her forthcoming film Love Hostel alongside Bobby Deol and Vikrant Massey in Bhopal. The film is produced by Shah Rukh Khan’s home banner Red Chillies Entertainment.

Now during an Exclusive interaction with DNA, Sanya spoke at length about Pagglait’s success, comparison with Ramprasad Ki Tehrvi and if she met/spoke to Shah Rukh. The actor called it a ‘dream come true’ and hoping that the superstar texts her after watching the rushes of Love Hostel.

How relieved are you now that Pagglait is out and people are loving it immensely? How challenging was it to shoulder a film with strong content and backed by a stellar supporting cast?

Honestly, I never put that pressure on myself. I had confidence that this is going to be a good one. I had doubts about my performance and seeing how much confidence Umesh sir and Guneet had in me really motivated me. I thought that this is a script and a character worth taking the lead or whatever you want to call it. So I never took the pressure that I’m shouldering the film on my own because it’s not just Sandhya’s journey. But as you said it made a lot of difference because I was working with such an amazing cast. So I never felt that ‘Oh my God, I’m shooting this movie mere nazook kandhon par‘. Never and honestly, this is what I felt, always. When we were shooting for the film we all felt connected to the script and the characters that we were playing. We all felt that we are making something special. It’s so heartwarming to see that people, as you said, are connecting to the film, the characters, they are internalizing the script and the film, how they feel and how they are connected to the story. So I’m very happy with the response and to answer your question, I never put that pressure on myself. I didn’t think about taking that pressure on myself.

When it comes to the character you play with how easy is it for you to switch off and switch on?

For Dangal, it was two years I was in that character. I was not aware if was in the character, I used to speak like Babita, even around my family and friends. Photograph, my second film, physically, I wasn’t doing anything like wrestling to get myself into the character. So I had to really mentally and psychologically get closer to Miloni. That is a character that I took back home and it stayed with me for a long period of time. I think Pataakha is the first time that I attended an acting workshop. I have to give this credit to Atul Mongia, my acting coach taught me how to disconnect and have that boundary with the character that you’re playing.

I don’t know how to explain this but now I know that sometimes for some scenes I let myself go and be that character like for Pagglait, I lived her life for 45 days, you know, because it’s a very happy film. She’s a very, I would say emotionally mature character and I would not mind living her life. But for some characters, I’ve learned how to disconnect myself mentally.

In these six years of being an actor, you have played a role which is totally different from each other. Is it a conscious decision or you can say filmmakers offer you a unique character to play?

It’s a mixture of both, it was a conscious decision because I think, Dangal, that character kind of motivated me to experiment as an actor. I have never learned acting and Ek ke baad sab Kuch kaam pe hi seekha hai. I am more than happy to experiment and do all sorts of roles, to know what really works for you. I’m actually very grateful that I, as an actor is getting amazing characters, different characters, unique characters to play. More so, the directors and writers are writing good roles for the actors. A great time for storytelling and just a great time for actors in India right now.

Recently Kangana Ranaut complimented you which made headlines. What do you have to say about her tweet?

I had a very big smile on my face and I was with my family. For a second. I couldn’t believe it, I was like, ‘Oh my god, she said I am good’. She is my senior and she’s a wonderful actor. This compliment coming from her meant a lot to me. That’s very sweet of her and I m extremely grateful.

Along with rave reviews, there also came criticism and comparison with Seema Pahwa’s Ramprasad Ki Tehrvi. Did you get a chance to read about what she thinks about Pagglait?

I read in an interview that Seema Pahwa Ji liked my performance and that was a nice surprise. I have watched Ramprasad Ki Tehrvi and I saw it in the theatre. I was so happy because after the pandemic the first movie I saw was Ramprasad Ki Tehrvi and it’s a very special feel, it’s a very good film. Both the stories are very nice and got so much love and appreciation from the audience. So that for me as an actor meant a lot.

What’s the update on Meenakshi Sundareshwar and Love Hostel?

I have completed Meenakshi Sundareshwar, they are working on the post-production now. We shot the film in Madurai and also a small village near to it. This was after the pandemic and I was so happy to be back on set. It was lovely working with Abhimanyu and Vivek Soni who is making his directorial debut with it. It’s a fun and very nice film.

I m in Bhopal right now shooting for Love Hostel with Vikrant Massey and Bobby Deol. The shoot is in progress and we have a lot of scenes left to film.

Love Hostel is produced by Shah Rukh Khan’s Red Chillies Entertainment. Did you get a chance to meet him or interact with him yet?

Not yet, but I m hoping… It’s a very special feeling, to be honest, it feels like a dream (laughs) to work in a film by Red Chillies. When that announcement came I was quite excited, I was shivering, I posted it on Instagram. Produced by Red Chillies was enough (chuckles). I hope that he texts me, hoping that he watches some of the rushes we have shot till now. Kuch bolenge toh main bohot khush ho jaungi!