Did you know Karisma Kapoor was rumoured to marry Ajay Devgn? 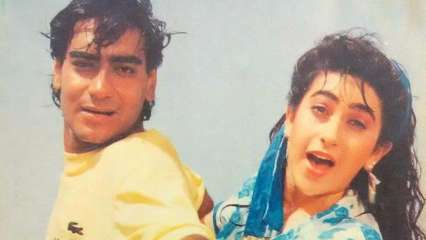 ‘Jigar’, ‘Suhaag’, ‘Shaktiman’ are just a few films that come to mind when one talks about Karisma Kapoor and Ajay Devgn and their undeniable chemistry in the early 1990s. While Ajay and Karisma received immense love from fans and audiences for their chemistry and performance on screen, the two stars were often subjected to off-screen rumours about dating and tying the knot.

In an interview with Stadust magazine in 1993, Karisma had candidly opened up about her alleged relationship with Ajay and had clarified that there was no wedding waiting to happen and further assured that they were not even dating.

Karisma had said, “Believe me, we’re just friends yaar. I don’t know if he feels that way about me because he’s not told me anything. But I don’t think that’s possible. People are only coming to this conclusion because it’s the most obvious one. Firstly, he saved my life and secondly, we’ve signed so many films together. Some stupid fools have even gone ahead and written that we’re getting married. C’mon, I’m a kid myself; how do you expect me to get married at this age? It’s so funny really.”

Karisma also spoke about her then rumoured boyfriend’s reaction to the report and said, “You know Jeh (Wadia) called me up from London and screamed, ‘What’s all this I’m reading about you? Did you get into the film industry for all this?’ he asked me angrily. Now he’s coming down in a couple of week’s time. Wonder how I’m going to face him. See, all this tension I’ve to face due to no fault of mine,” Karisma told Stardust in 1993, via Pinkvilla.

Sure, we all know what basics professional women are supposed to have in their closets, but if you’re...
Health