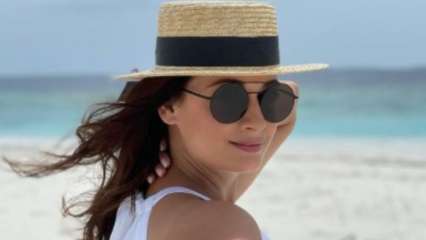 Dia Mirza is in the Maldives with her husband Vaibhav Rekhi, on their first vacation post-wedding in February. She has posted a string of images on Instagram from the trip. One picture, where Dia poses with her stepdaughter, has particularly captured social media fancy.

In the images, Dia is in a perfect holiday mood, dressed in light summer wear, big rounded shades and a hat, as she poses against the backdrop of the sea, the beach, blue sky and island flora. The photographs have been clicked by Vaibhav.

“Cast Away’ let’s play Our #JAMoment on a secluded island in the sun! What fun Thank you @travelwithjourneylabel @jamanafaru_maldives for a another perfect day. Photos by Him (Getting better),” Dia wrote.

Two days agoo, Dia had posted the first series of images from her vacay in the Maldives.

The actress shared happy pictures posing on a Maldivian beach in the backdrop of a luxurious over-water-bungalow and the pristine waters of the scenic location.

Meanwhile, Dia Mirza created quite a stir on social media with her latest tweet. Reacting to a piece of news shared by a portal on micro-blogging site Twitter, the headline of which read ‘Human pe**ses are shrinking because of pollution, warns scientist’, Dia quote-tweeted the article and wrote, “Now maybe the world will take #ClimateCrises and #AirPollution a little more seriously?”

While a section of Twitter users agreed with Dia that people should take the ‘climate crises’ and ‘air pollution’ situation more seriously (not in reference to the news article), a section of the Twitterverse had a good laugh at the actress’s reaction to the article.

For the unversed, the actress married Mumbai-based entrepreneur Vaibhav Rekhi last month in a small, intimate ceremony, with celebrities such as Aditi Rao Hydari, Jackky Bhagnani and Gautam Gupta attending.

She had taken to social media to inform her fans that only biodegradable and natural materials were used for her wedding ceremony. The wedding was conducted by a woman priest.

The actress was previously married to Sahil Sangha in 2014. They announced their separation in August 2019.