Delhi Capitals in deep trouble, Jaydev Unadkat on a roll on RR return 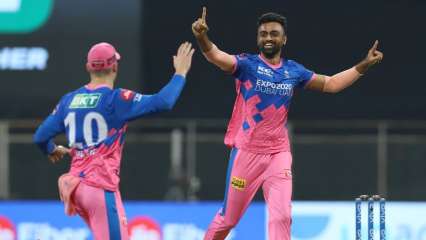 Jaydev Unadkat, Rajasthan Royals pacer, who didn’t feature in his side’s first game against the Punjab Kings in the 2021 season of the Indian Premier League (IPL), was on a roll as soon as he arrived at the bowling crease on Thursday against the Delhi Capitals.

On a different wicket at the Wankhede Stadium, where the ball was gripping and stopping in the surface, Unadkat made full use of his cutters and slower balls and foxed the DC batsmen. First was the right-handed batsman Prithvi Shaw, who was deceived in the air and was done by Unadkat’s angle.

Shaw was early on to the flick on that 112 km/hr ball, got a leading edge that went straight into the hands of the backward point fielder David Miller.

Next was Shikhar Dhawan, who tried to paddle the pacy delivery, but a flying Samson came in his way with a one-handed stunner with his right hand and DC were reduced to 16/2.

He didn’t stop there as the left-arm pacer superbly deceived DC No 3 Ajinkya Rahane with a slower ball, a 109.8 km/hr delivery. Rahane came down the track a little, to his credit he did spot the change in pace but a little too late as he chipped back past to the bowler, to hand Unadkat a dolly into his hands. Dc were in deep trouble at 36/3 after six overs.