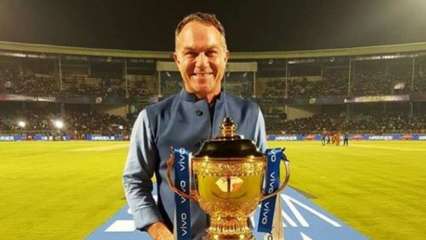 Commentator and former Australian cricketer Michael Slater has once again come out and lashed at his country’s Prime Minister Scott Morrison for the travel ban imposed on those travelling from India due to COVID-19 crisis and putting restrictions like jail-term and hefty penalties for those entering Australia from India.

Slater, who was part of the commentary team in the IPL has urged the PM to see the struggle of Australians in Indian in current situation and has asked him to personally visit the country in his private jet and witness the ‘dead bodies on the streets’.

Slater took to Twitter and wrote, “Amazing to smoke out the PM on a matter that is a human crisis. The panic, the fear of every Australian in India is real!! How about you take your private jet and come and witness dead bodies on the street!”

Amazing to smoke out the PM on a matter that is a human crisis. The panic, the fear of every Australian in India is real!! How about you take your private jet and come and witness dead bodies on the street!

Slater also gave his love and wishes and prayers for Indians, who have been going through the devastation the pandemic has brought and mentioned that this country has been but amazing to him every time.

Above all my love and prayers to every Indian. You have been nothing but amazing to me every time I’ve been there. Please stay safe. Xx

Slater had lashed out at the Australian Prime Minister Scott Morrison amid the travel ban as coronavirus continues to rage in India. However, Twitterati slammed the former Australian batsman for putting money before health amid the coronavirus pandemic.

After several such accusations, Slater clarified that he has not earned anything since he departed from India midway. He also urged everyone to not “abuse” him for his comments on the Australian PM’s decision of travel ban. Slate later challenged the PM for a debate also.

And did just read greed over common sense! Your government granted me permission to work so I can pay for 3 beautiful children through school and pay a mortgage. So where does common sense lie. Not on my end!

I challenge you to a debate anytime PM.

Now, BCCI is in with constant touch with Cricket Australia for arranging flights from the Maldives or Sri Lanka for 40 cricketers, commentators and members of support staff.

Sample generic cover letter. It is always advisable to personalize your general cover letter for the target job...
Opinion