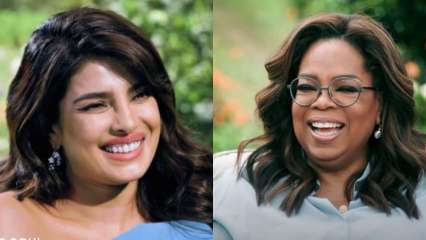 A new promo of international star Priyanka Chopra Jonas’ upcoming interview with talk show host Oprah Winfrey, which is all set to air on Sunday, March 20 in India, dropped on Friday. However, viewers in the US have been able to watch it a day in advance and reviews have been pouring in on Twitter.

Netizens have been lauding Priyanka for the franks interview in which she shared anecdotes about her secular upbringing, why she chose to write the memoir at this point in her life and how she judged a book by its cover when Nick Jonas approached her.

Social media users hailed the ‘Baywatch’ star for opening up about her secret, struggle and life. They even trended the hastag #ChopraOnOprah on Twitter.

“Every once in a while a brilliant interview comes along that is remembered throughout the years. #ChopraOnOprah is certainly one of them with like a million great moments,” wrote a social media user.

“Firstly i was her fan but now she’s my inspiration, my idol. Watched her interview. You should watch it too. #ChopraOnOprah.” wrote another user.

“There was a time when @priyankachopra, an outsider was openly ostracised by the so-called Bollywood elites and TODAY she’s in a league of her own, carving a new path for herself every single day and inspiring several others to follow along. THAT IS POWERFUL. #ChopraOnOprah,” commented yet another user.

Check out some tweets here:

Every once in a while a brilliant interview comes along that is remembered throughout the years. #ChopraOnOprah is certainly one of them with like a million great moments. Catch it on the Discovery plus app asap!

Firstly i was her fan but now she’s my inspiration , my idol. Watched her interview.

There was a time when @priyankachopra, an outsider was openly ostracised by the so-called Bollywood elites and TODAY she’s in a league of her own, carving a new path for herself every single day and inspiring several others to follow along. THAT IS POWERFUL. #ChopraOnOprah https://t.co/eFVFJ8mmnp

Love to tell you that Woah this woman is so inspiring! Thank you Priyanka for talking about your life and making us feel we’ll be okay. #ChopraOnOprah pic.twitter.com/wOcs5Pye8g

Meanwhile, in the highly anticipated sit-down, Priyanka will be seen talking about her personal life and growing up as a child in India. Answering Oprah about finding her voice during the COVID-19 pandemic by deciding to write a memoir at a very young age, and whether it was all that COVID time that led her to do so, Priyanka said, “I have to say a little bit of it had to do with that, but I had committed to writing the book in 2018, and in between all those flights and the little time I would get in all the hotel rooms that I would live I could just never write. But I had this time because of COVID and that helped me really delve deep.” “And honestly, I also feel like I, as a woman in a little bit more of a secure place, where I felt like I could leave behind the insecurities of my twenties and not worry about the things that used to scare me before, as much. I have a little bit more confidence in myself, in what I bring to the table professionally, personally. So, I think that really helped me address my life and I just always wanted to write a book. And I thought the easiest way to do it would be to write about my life,” explained Priyanka, who at the end chuckled by adding, “it was not”.

They then spoke about Priyanka’s fairytale love story with her husband Nick Jonas. Oprah mentioned that in her book it says that Priyanka thinks her mom “dreamed him up”. To this Priyanka echoed Oprah’s words, that she was definitely “swept-ed” off her feet and added on by saying that, “I may have judged the book by the cover. I did not honestly take it very seriously when he was texting me. I was 35. I was, like, I want to get married. I want to have kids. He is, you know, in his 20s. I do not know that is something he would want to do. Like I did that to myself for a while. Till I actually went out with him. And nothing surprised me more than him.”

Praising her hubby, she continued, “He is such a self-assured man. So sensible. So excited about my achievements. My dreams. You know, such a true partnership that he offers me in — in everything that we do together. That I truly believe that my mom manifested him.”

The conversation then shifted towards Priyanka’s homeland, India. Oprah discussed with the actor that reading her book made her reflect on her own trips to India and said that “One of the things that was so powerful is the spiritual energy there. The sense of connectedness between people and prayer.” Adding that “it is all so present”, she asked Priyanka whether she had a spiritual foundation growing up. To this Priyanka replied, “I think in India it`s hard not to, you’re right – with the swirling number of religions that we have that live within the country as well. I grew up in a convent school – when I went to school I was aware of Christianity, my dad used to sing in a mosque, (so) I was aware of Islam, I grew up in a Hindu family I was aware of that. So, spirituality is such a large part of India that you can’t ignore it.”

On her family life, she said, “Also my family really believed in having a higher power and having a sense of faith. This is again something my dad used to tell me, he was like basically religion is all a way to get to a supreme power and every religion has a different face to the same direction where we’re going – whatever your face is, whatever your version of that is, its just a means to an end. And so, I am a Hindu and I pray, I have a temple in my home, I do it as often as I can. But at the same time to me I am truly more spiritual I feel – I am a believer of the fact that a higher power does exist and I like to have faith in that.”

Speaking about missing her home, India, Priyanka said, “I just miss India. I have not been back since Holi last year and, you know, India’s my home and I just want to come back visit and smell it and live it and meet my friends and I also want to, you know, do a Hindi movie.” “I have not done that for a while. So, I just miss home a lot. I just want to be able to get on a flight and land in Mumbai,” she concluded.