Abhishek Bachchan starrer high-anticipated film ‘The Big Bull’ was released for the audiences to watch on Disney+ Hotstar, Thursday evening. Now, after the premiere of the film, Abhishek has opened up about the Bachchan family aka Amitabh Bachchan, Jaya Bachchan, Aishwarya Rai Bachchan’s reaction after watching his recently released film.

Speaking to Bollywood Bubble, Abhishek said, “She (Jaya) doesn’t see my films before release. She’s superstitious. My family has seen the film. Ajay (Devgn, producer) showed them the film. But my mom hasn’t seen it, because she’s superstitious. It’s releasing a day before her birthday, so she said as a birthday present she’ll see the film. So, she’s going to see it then, and I’m sure she’ll tell me exactly what she feels.”

Abhishek also revealed his father and superstar Amitabh Bachchan’s reaction to the film. He said, “The rest of the family really liked the film. My dad had wonderful things to say. In a sense, I’m already happy, because the one voice that matters to me has already endorsed the film, so I’m happy about that.”

Abhishek said that like his mom, Aishwarya also doesn’t like to see his films before release. “Aishwarya only watches my films after release.” On the other hand, Abhishek’s niece Navya Naveli Nanda, took to her Instagram account and called her uncle ‘the one and only Big Bull’. 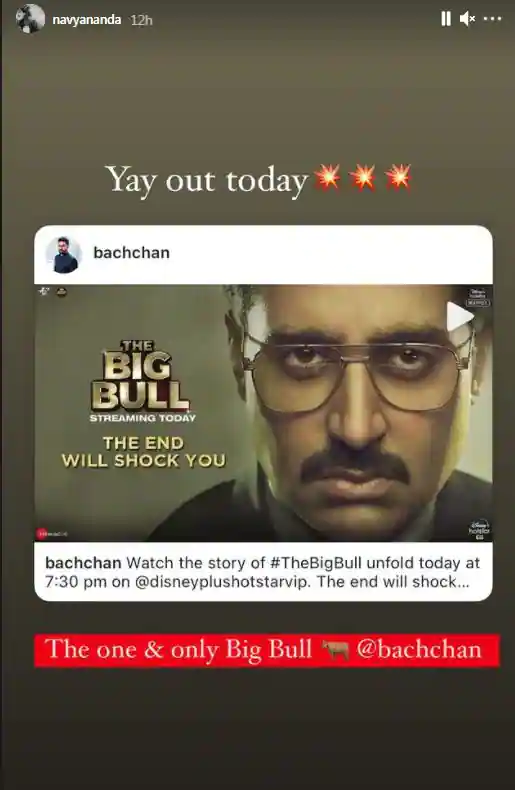 Abhishek had shared a poster of the film and written on Instagram earlier, “Watch the story of The Big Bull unfold today at 7:30 pm. The End will shock you.” Sharing his post on her Instagram stories, Navya wrote, “Yay out today. The one and only Big Bull Abhishek Bachchan.”